This is a sculpture exhibition of smaller scale works reflecting and echoing the sculptures exhibited in Crucible 2 2014, or the previous Crucible 2010, both at Gloucester Cathedral.

My main piece to be shown in Mini-Crucible is a medium size bronze entitled ‘Right in Time’, which echoes the monumental ‘You and Me’ shown in the first Crucible. It is also a sculpture with many similarities to the work in Crucible 2, ‘In Man’s Nature’. Like that work, this is a very simple and highly-finished painted bronze with a simple incised line picked out in a contrasting colour to represent the salient features.

It was first exhibited in 2009 in my solo exhibition ‘Behind the Lines’ at Pangolin London and in the catalogue I wrote the following about its derivation:

“Closely related to ‘Eachway Heads’ and ‘Midnite Movie Heads’, (see catalogue Odd Birds and Other Selves, 2005) this work seems more animated. Oddly, the way in which the two heads incline away from each other makes them seem more intimate than in the other pieces. At the same time the sculpture is more dynamic and implies movement; perhaps they are dancing their way through time? The title makes several references: the attitude of the heads is reminiscent of the hands of a clock; perhaps conceitedly, they are also right for this moment. However, the title is mainly suggested by a Lucinda Williams’ song of the same name, in which she sings of her partner being ‘right in time’ with her.”

Although my current practice has inevitably evolved from his particular work, seeing it again in this sculpture exhibition, it was very pleasing to find how exciting and dynamic it still looked as a contemporary sculptural object and how beautifully it has been produced as a bronze sculpture by the foundry. 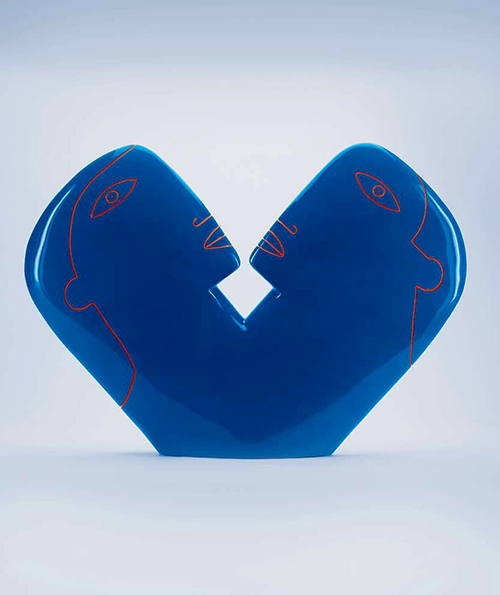