Home › Sculpture Gallery › Behind the Lines 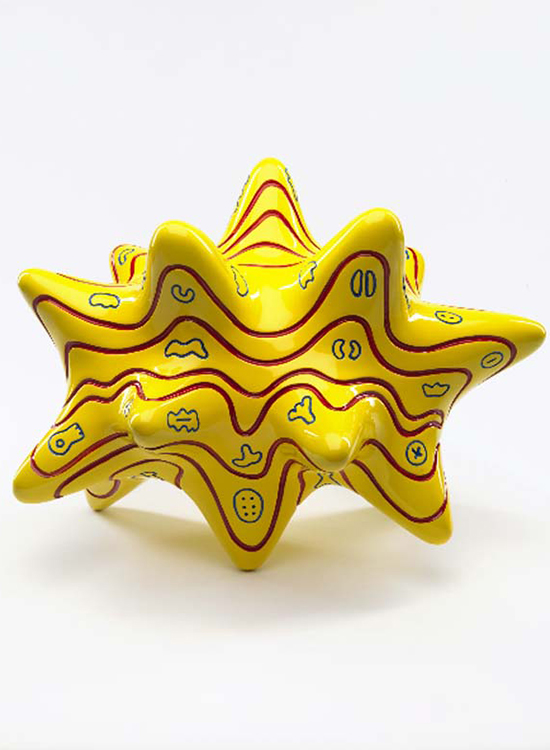 The title for this body of work alludes to the proposal that beyond the graphic elements on the surface of these sculptures there is an implied narrative that expands their meaning. There is also a slightly tongue in cheek reference to the idea that my own practice continues behind the ‘front lines’ of what is considered the mainstream of contemporary art.

From imprinting the whole surface of my sculptures with geometric patterns to replacing these with an inscribed drawn line has been a natural evolution and this simple act fundamentally changed the nature of my work. What had previously been an initial act of drawing followed by the secondary process of making sculpture has now been compressed into one autonomous activity. This in turn has led to a greater reduction and abstraction of sculptural form, naturalism often replaced by a mixture of graphic symbols and emphasising contour lines.

Thematically, the work in this group has continued to reference a mix of mythic and scientific responses: to ourselves, to our history and to the world that we inhabit. Images reflect my continuing preoccupations, ranging from the art of Prehistory in sculptures such as On the Lines of Lascaux and Man’s Best Friend, verses from the nature poets in work like Headlines, as well as the organic patterns of evolution and biological form in general, represented by Lines of Lineage, Proteiform and Biomorph.

After the human figure, images of birds and dogs have continued to be the most common recurring themes in my work. I see them as simple alter egos that represent two opposing elements in our psychological make-up. The dog is instinct, our innate impulses, while the bird is intuition and our creative insight. Neither is an absolute and there are elements of both in all of us. Consequently none of the sculptures are naturalistic representations and often end up as amalgamations of images. In this body of work, humankind is most often represented by the head alone. The animal metaphors now exist not externally, as they have before, but partly or completely consumed into the form of the head itself, as in Headland, Birdman and The Nature of Thought.

The simplicity of my ‘drawn sculptures’ has brought about a greater need to have contrasting coloured surfaces to provide clarity. The polychrome effects on previous work have been achieved by using quite complicated combinations of different pigments and patinas. These sculptures, although still cast in bronze, have much simpler paint applications that have had the effect of producing even bolder, brighter and more dynamic effects.