Home › Sculpture Gallery › Turning Inside Out 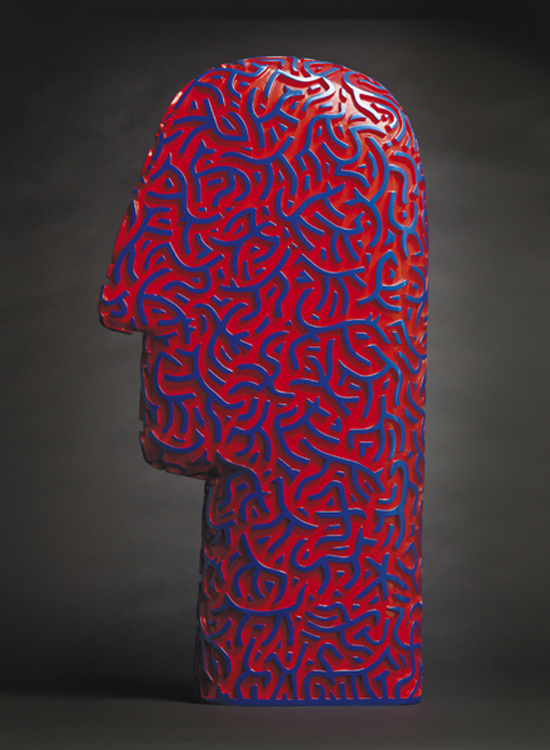 Even as a child the natural world was always a delight and fascination to me, and art and the creative process followed closely behind. It has taken many years to decide exactly how I might effectively combine these two passions in a meaningful way.

Over the years of making I have come to recognise that there are aesthetic parallels between evolutionary biology and our own human cultural development of image-making. For example, my own current sculptural concerns have been informed by looking at patterns. In nature patterns occur everywhere and are especially evident in the markings of animals, birds and fish. In biology this process is developed by special pigment cells in the skin being switched on and off to produce dots or elongate into lines, which in turn can further develop into circular motifs. In the same way, it would seem the beginnings of human art developed from similar vocabularies made up of the same organic geometries of dots, lines and circles. Judging from anthropological and archaeological evidence these motifs probably started as decorations on the body, before at some point being transferred to other, inanimate surfaces. These abstract patterns, like their biological counterparts, must have gradually developed into coherent patterns and over time have developed into visual symbols and representations of our cultural lives.

Such conspicuous markings in nature seem to fly directly in the face of survival by flagrantly attracting the attention of predators. This perplexing situation forced Darwin to adapt his initial theory of Natural Selection and develop an additional hypothesis, that of Sexual Selection. In essence this is a much more bizarre and exciting theory, which contends that the female, by choosing to mate with the male with the most exaggerated version of the species ‘blueprint’, will gradually force a change in a mate’s physical attributes that in time will evolve into an entirely new species. Females, it would seem, in many species have an advanced appreciation of aesthetics and furthermore it seems that these closely resemble those for which we also have empathy. As Darwin suggested, their beauty is our beauty. This theory of Sexual Selection has been popularised by authors such as Matt Ridley in his ‘Red Queen’ hypothesis, and Geoffrey Miller in ‘The Mating Mind’, as the basis even of human art.

The work in ‘ Turning Inside Out ’ reflects these ideas. The sculptures ‘Red Queen Rules’, ‘Symphysis’ and ‘Part of the Puzzle’ directly suggest biological patterns found in non-human creatures, whereas works like ‘In Man’s Nature’, ‘Mind Menagerie’ and ‘Repository’ express our own propensity to make symbols that have a very similar visual aesthetic. However, though this work may be nurtured by the world of science, for me our connection to the rest of nature is essentially an intuitive one and best expressed with the sort of lyricism poetry engenders:

Ah, not to be cut off,
not through the slightest partition
shut out from the law of the stars.
The inner — what is it?
if not the intensified sky,
hurled through with birds and deep
with the winds of homecoming