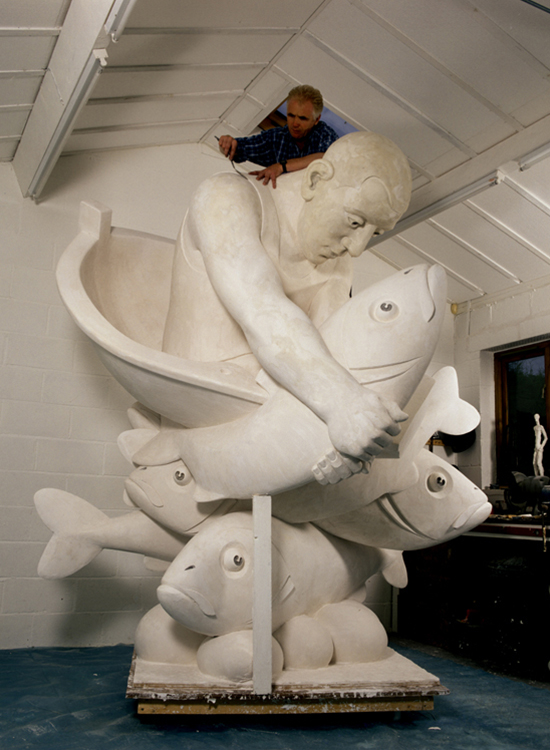 During the Eighties anxieties about the environment became much more prevalent and for much of the next decade I worked more overtly to show my own concerns with these issues: ‘Peaceable Kingdom’, ‘Tree of Life’, ‘Man and Fish’, ‘Preserving the Fish’ and ’Embracing the Sea’ all referred to our relationship to the natural world and the guardianship we hold over it. These compositions took the form of tightly held embraces of animals and humans. We all need others to feel protected, loved and cherished and it seemed logical to return and reflect on our relationship with ourselves. These compositions became complicated knots of human form, often so tightly entwined they shared each other’s limbs; some were protective and passive while others were more ambiguous and passionate. A time came when I was in danger of repeating myself and I could see there were others around me now producing work that looked uncannily like my own. It was time to move on.

Although these compositions had been sensuously satisfying, to some extent they failed to exploit the full potential of bronze as a medium. Unlike carved materials, bronze can be thin and extenuated and can entrap spaces as exciting as the forms they penetrate. In response to these deliberations, sculptures such as ‘On Our Heads’ and ‘Equilibrium’ exploited this new freedom and introduced a new spatial dynamic that caught echoes of some my earlier work. Eventually the figures became pulled apart, perhaps suggesting that to focus on our own individuality has the potential to isolate us not only from each other but also from the rest of the living world. In ‘Cast Apart’ the embracing couple remain separated in frozen animation; in ‘Man of Parts’ the figure even becomes divorced from his own body parts in a disembodied assemblage, as if in some Descartian dream. The viewer can be engaged imaginatively however, mentally cutting the individual elements free to reconstitute them in one’s mind.