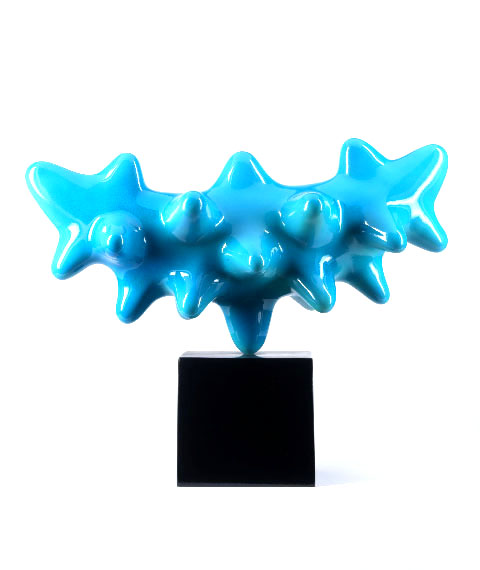 This is an exhibition curated by Kate Parsons following her time as artist in residency at the Foundation Art Centre in Kasese, Uganda in 2014. The title of the show is used both its biological sense and also in the sense of the sculptural processes that are employed by all the artists in this exhibition. As well as work by Kate herself there are two Ugandan sculptors, Lilian Nabulime and Peter Oloya and Steve Hurst and myself both of whom have established links working with the Foundation.

My own experience working in Uganda started in 2004 when I was invited to give a sculpture bronze-casting workshop at Makerere University. Discovering a surprising lack of historical visual culture in Uganda led to an idea to reinvent and revivify designs for indigenous clan totems that seemed to have been long lost in the mists of time. Gradually this project became the mainstay for the bronze foundry that was being developed at the Foundation’s centre in Kasese. After several return trips to do what research was possible, it was 2009 by the time we started to cast the first work and to date over thirty different designs are being reproduced in bronze. Five years on with the foundry well established the Foundation invited me to return to undertake a commission that would be the founder’s first a large scale casting. Bird in the Bush as the sculpture came to be entitled is now sited outside the Foundation’s gallery. It is intended to be emblematic of the environmental reconstructing they are undertaking along side their art projects with European and Ugandan artists and coincidentally it could even be seen to celebrate ‘Reproduction’ in both its senses.